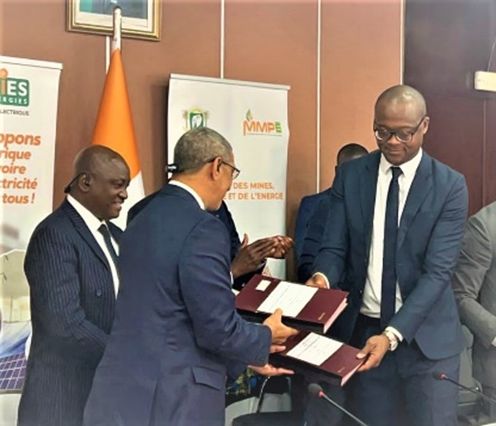 On Friday October 21, 2022, a Power Purchase Agreement (PPA) was signed between CI Energies, CIE and LEC, for the supply of 27megawatts of electricity to Liberia. The power will be transmitted through the CLSG Transmission line. Power supply to Liberia will commence on December 1 of this year. Signing on behalf of the Government of Liberia was the Acting CEO and Chairman of LEC, Mr. Monie R. Captan, while Mr. Noumory Sidibe Director General of CI Energies and Mr. Ahmadou Bakayoko Director General of CIE signed on behalf of their respective companies.

“Today marks a major milestone in our effort to create a regional energy market and interconnect our electricity networks,” said Hon. Gesler E. Murray, Minister of Mines and Energy.  “The supply of energy from La Cote d’Ivoire will significantly help stabilize our energy supply during the dry season when we face major energy deficits.”

From all indication, this represents a big step forward in improving education, health, security and will also improve the livelihood of urban and rural communities. The agreement offers a long-term electricity supply arrangement between the parties and will ensure the viability of trade on the transmission line between benefitting countries.

“We will like to express our thanks and gratitude to financial and technical partners for support to this project which is going to make an impact in the lives of beneficiaries”, said Hon. Mamadou Sangafowa Coulibaly, the Minister of Energy of the Ivory Coast. “I ask Minister Murray to convey to the authorities of Liberia the gratitude of La Cote d’Iviore. We want to thank the Presidents of Liberia and our own country, for their strong enforcement in making all of this work.”

With the signing of this agreement, the LEC management is confident that the country is getting closer to its national goal of increasing access to electricity for all Liberians. The management is encouraging all its customers currently connected to the national grid, to use the electricity wisely and not undermine its ability to serve the general public through misuse and theft.

“This additional power should help us go a long way in addressing our dry season needs,” said Mr. Monie R. Captan, Acting CEO and Chairman of the Liberia Electricity Corporation (LEC). “La Cote d’ Ivoire is not giving us free electricity. This PPA is a commercial agreement requiring Liberia to pay for the electricity it receives. The greatest effort that can be made to curtail the misuse of this power, is through community engagement. There has been a lot of enthusiasm shown by our people to get involved in ensuring we pay for the electricity we will receive.”

According to the service provider, this PPA is for a 3 year term and is renewable.  “All parties will have to play their role in order to make it sustainable,” said Mr. Noumory Sidibe, Director General of CI Energies. “This PPA with Liberia could not be signed earlier because of some conditions precedent which have now been met. CIE will deliver to Liberia 25 megawatts on December 1, 2022 and go up to 27 megawatts in January 2023.”

In the meanwhile, a Transmission Service Agreement will be signed on October 25, 2022 in Abidjan between LEC and Transco CLSG for the transmission of energy purchased from CI Energies/CIE.

In another area of national power generation, Liberia will shortly begin the implementation of a 20-megawatt solar project and the expansion of the Mt. Coffee Hydropower Plant by 44 megawatts. This partnership is between the World Bank and the Government of Liberia. Additionally, WAPP, GOL and the World Bank are developing plans to build a 112MW hydropower plant upstream of the St. Paul River. Currently, Liberia’s energy generation portfolio is 70% renewable and 30% thermal based. Liberia expects to achieve an 80% renewal energy base by 2026.