Liberia Electricity Corporation (LEC) is implementing a number of projects in order to increase electricity infrastructure, and access to electricity in line with the Government of Liberia’s (GoL) ambitious plan to expand electricity services to cover 70% of Monrovia and 35% nationwide by 2030 as indicated in the Liberia Energy Access plan.

The rehabilitation and expansion of the electricity network infrastructure which commenced seven years ago has made tremendous progress especially over the past 4 years in meeting the key objectives of the stakeholders and Government of Liberia (GoL) to improve electricity infrastructure, increase access to electricity and to support LEC to be commercially viable. The international partners including multilateral lending institutions have been very supportive to rehabilitation and rebuilding of the energy (electricity) sector as this sector is the fundamental driver of the country’s economic growth and social sectors. The Liberian energy sector has been funded by the World Bank in collaboration with other international donors, including the Government of Norway (GON), Japanese International Cooperation Agency (JICA), United States Agency for International Development (USAID), KfW, African Development Bank (AfDB) and the European Union (EU).

Some of the major milestones achieved by LEC in the last 4 years include the rehabilitation, upgrading, and building of 7 new bulk supply substations with an additional installed transformer capacity of 140 mega volt amperes (MVA). In addition to this, 2 new substations with installed transformer capacity of 40 MVA are currently under construction and are expected to be commissioned by December 2022. A total of 142 kilometers (km) of transmission lines have so far been built and energized, while an additional 55 km of transmission lines are under construction and shall be completed by December 2022. During the same period a total of 2,200 km of distribution network and 840 distribution transformers have been built in Monrovia and its environs. The recent connection of over 99,500 households and commercial installations have contributed significantly to the increase of the LEC customer base which now stands at 160,000 from 36,000 in 2015 as shown in the graph below. 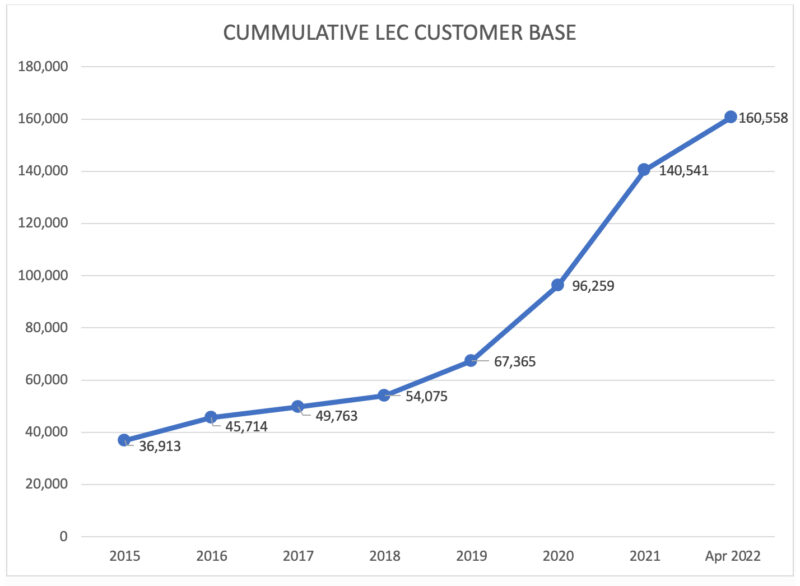 LEC targets to connect an additional 100,000 households in the next 2 to 3 years through the ongoing electricity network expansion and access projects. A total of 1,750 km of distribution network and 675 distribution transformers will be added to the existing network.

It is worth noting that LEC has successfully migrated from diesel to HFO-based thermal generation needed for the country to effectively benefit from the price differential of the two fuels on the international market. The construction of the HFO storage tanks and associated pipeline has been implemented and LEC, for the first time, in March 2020, utilized the facilities to transport and store competitively procured HFO fuel for the thermal plant at Bushrod. In addition, the implementation of the Integrated Management System (IMS) was completed and all the main modules are now operational which has seen the migration of 99% of the post-paid and pre-payment customers to the Customer Management System (CMS) on the IMS platform.